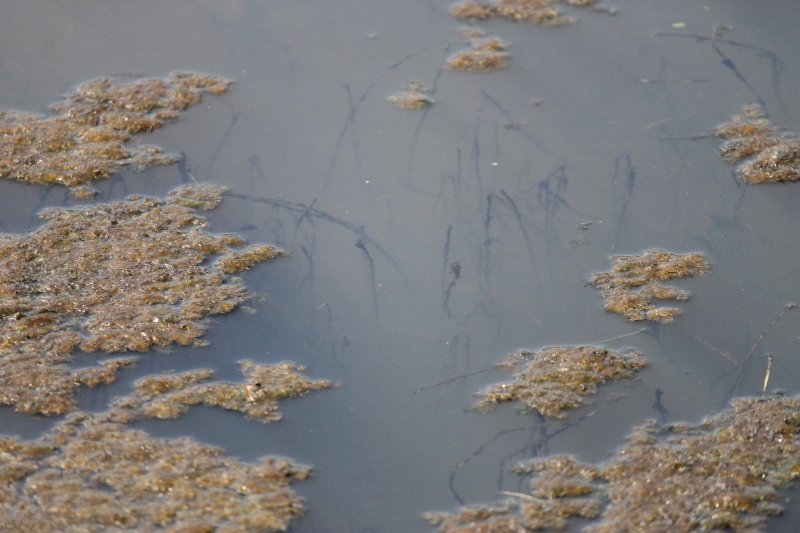 I still remember that pond. I remember taking a picture of it. And I remember being told a moment before that they dropped the ashes in ponds like this, in the land around Oświęcim. It was a quiet and sunny August morning six years ago in Auschwitz-Birkenau. I was with a group of young Germans, high schoolers and university students, accompanied by a Belarusian woman who had survived the death camp as a child, and staff of  a German memorial site. The day before, we had been to what is called the “Stammlager”, or Auschwitz I, the first camp to be built there in May 1940. It was smaller, and crowded. We passed through the infamous gate with the “Arbeit macht Frei” slogan. The grounds were filled with travel groups, and it felt more like a tourist attraction than a place to commemorate. The people didn’t help: you can take pictures almost anywhere in Auschwitz – except in the reconstructed gas chamber, in front of which a sign asks not to take photos out of respect for the many who died in those rooms. It didn’t stop flashes from clicking when we walked through. Of course, there are nevertheless images I can’t forget from that day. In the Israeli exhibition, the large Book of Names suspended from the ceiling, containing 4.2 million names. The piles of suitcases the people had written their names on, expecting to get them back. Spotting a familiar address – the street my elementary school was on, back in Hamburg. Other piles: glasses, spoons, shoes, finally: hair.

But Birkenau was different. It was wide and empty. The railway tracks, the motif seen a thousand times. But also a lot of nothing. The crematoria had been blown up, in a useless attempt at hiding the crimes. Birkenau was terrifyingly empty. It gave you space to think.

A few months ago, CNN commissioned a survey among 7,000 Europeans: Germans, Austrians, French, Brits, Hungarians, Poles and Swedes. They were asked about their views of their Jewish citizens, and about their knowledge of the Shoah (the biblical term that is sometimes preferred to the word Holocaust as the latter implies some sort of sacrifice). The results were shocking: one in eight young Austrians said they had never heard of the Holocaust. One in five French between the ages of 18 and 34 said the same. Four out of ten Austrian adults said they knew ‘just a little’ about the Shoah. The issue reaches beyond the European continent, however: a similar study among Americans found that 45% of adult US citizens could not name a single concentration camp.

The study did not paint an entirely bleak picture, however: 93% of the Americans questioned agreed that all students should be taught about the Shoah in school, and four out of five thought it was important to keep teaching it to prevent the repetition of such atrocities. Still, it is clear that the Holocaust is – if indeed slowly – fading from our collective memory. A question that may not yet be pressing may very much become so in a few years’ time: what to do about our memory of the past? What is the value of preserving it, and how should it be done – after all, 70% of American survey respondents agreed with the statement that fewer people seem to care about the Holocaust than they used to.

All this is bearing in mind, of course, that the genocide of Europe’s Jews is perhaps the most prominent atrocity in recent world history. Imagine asking young Americans what they know about the Rwandan genocide – or young Europeans what happened at Srebrenica: the numbers would surely be much worse. And that is despite the fact that these genocidal acts occurred in the 1990s, barely a quarter century away. Forgetting the past makes it easier for history to repeat itself – a point most drastically exemplified by the fact that Adolf Hitler understood it when he rhetorically asked his generals in 1939 : “Who, after all, speaks today of the annihilation of the Armenians?”, which had happened some twenty-five years earlier.

Remembering matters in two ways. The first relates to the past: the world couldn’t stop the mass murder of innocents – the least it can do now is honour those who lost their lives. The scores of children who never got to grow up. The families that were never founded. The young people who never got to live their lives. Those who died and those who lived only to be tormented by their memories. The Book of Names in Auschwitz serves this purpose well: a million people may be just a number. But as little as a name can be powerful enough to make a tragedy personal. Dates of birth and death, the shortness between them symbolizing lives cut short. Information about a family, about a person’s profession. A photo. A letter. A shoe. A pair of glasses. The victims of Auschwitz aren’t ghosts, they are people, real people who lived real lives, lives which were stolen from them. They didn’t get to live those lives, but we do – and the duty we owe them is to remember. Remember and remember and remember more.

The second relates to the present, and the future. The second reason we ought to remember is because the past has lessons to teach us. With the image of the railway tracks of Auschwitz slowly fading in our collective human memory, so, too, the knowledge of what can be learned from the past is becoming weaker. The effects can already be observed these days, when we debate certain questions without acknowledging their historical dimensions: we debate the EU purely on its contemporary challenges and problems, neglecting the rationale for setting it up. Why have the UN, why abide by international norms, asks the new U.S. administration – questions its predecessors sixty or seventy years ago would have had no trouble answering.

Learning the lessons of history, however, is not the same as using Auschwitz as a rhetorical tool to bolster one’s arguments. When the Trump administration’s refugee separation policy was enacted last year and the world press published images of migrant children kept behind wire, some on the left were quick to draw a line to the images from Nazi concentration camps. It was, as anyone knew, a crude comparison: in the concentration camps, inmates were subject to daily, arbitrary abuse; they were forced beyond the point of exhaustion, they were tortured, deliberately malnourished and subject to cruel ‘medical’ experiments. The entire concentration camp complex was designed to facilitate the destruction of a people.  This is, of course, not what is happening in the tent cities near the southern U.S. border. The point is this: separating migrant families is cruel and appalling on its own terms, the inhumanity of such a policy is evident without the need for historically inaccurate comparisons. Learning from Auschwitz does not mean we need to draw such direct lines all the time, it means we learn from the past to be vigilant, to defend values such as human dignity, tolerance, and humanity.

So, how vigilant are we today? The world’s reaction to mass atrocities, it seems, is more patchy and variable than comprehensive and robust. When 10,000 people were killed and 800,000 driven from their homes in Kosovo in 1999, the capital from which these crimes were organized – Belgrade – was pounded into submission by NATO bombs. When 10,000 people are killed and 800,000 driven from their homes in Myanmar in 2017, we send UN lawyers to tell us it was genocide – then sit on that fact while Bangladesh quietly negotiates the repatriation of refugees to a country that tried to erase their existence.

Now when Germany’s foreign minister Joschka Fischer tried to goad his pacifist Green party to vote in favour of NATO intervention twenty years ago – Germany’s first military operation since 1945 –  he stood at a party conference lectern repeating the mantra “Nie wieder Auschwitz’’ – never again. Skeptics of the NATO bombings were quick to attack his alleged rhetoric hyperbole, even though Fischer had pointed out in his speech that “Auschwitz is incomparable”. But the lesson of Auschwitz, he argued, was a never again. The man currently holding Fischer’s post, Heiko Maas, once expressed sympathy for his predecessor’s views, and declared that it was the horror of Auschwitz that had motivated him to enter politics. Yet, at the same time, when asked about Germany’s duty to prevent current atrocities, Maas replied: “Syria is not Auschwitz”. Of course, he is right, and the inadequacy of crude comparisons has been referred to in this text. But it is equally right that one can question how far the international community has come when we stand by unconscionable war crimes, whether they were committed in Rwanda and ex-Yugoslavia twenty years ago; or in Syria, Yemen and Myanmar today. 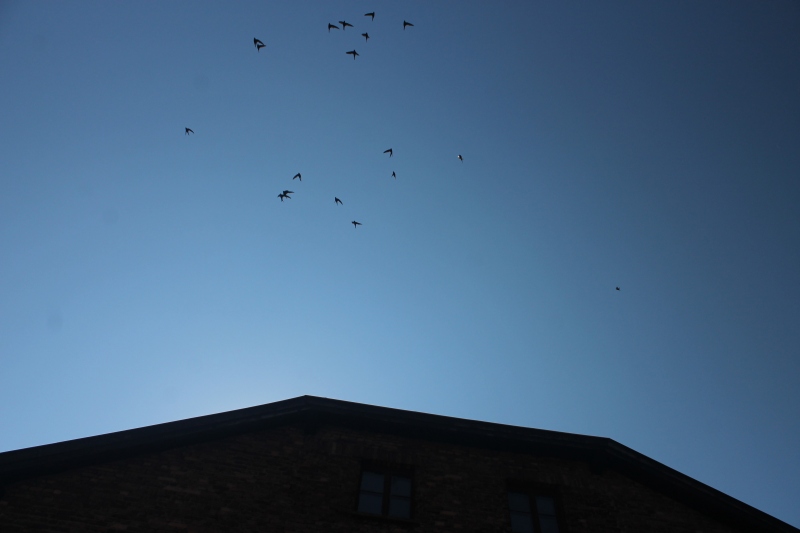 Birds fly over a cell block in Auschwitz I concentration camp, August 2013

The questions thrown up by the past, and how it connects with our own lives, are not easy to unpack and answer. But they need to be faced. Memory is no simple exercise, it requires not only preserving the facts and keeping them in our collective conscience, it also mandates respect for the past. The more distant the horrors become, the more people feel unbound by the need to respect the memory of those who were victimized by the most cruel crimes in human history. The shockingly widespread and tasteless phenomenon of people taking holiday selfies in places like Auschwitz is amply described, in articles and books and films. But even respectfully commemorating the past has little value if it is not linked with the learning process for the future. In April 1993, at the dedication of the U.S. Holocaust museum in Washington, Shoah survivor Elie Wiesel directed some words at President Bill Clinton, who was sitting in the audience: “And, Mr. President, I cannot not tell you something. I have been in the former Yugoslavia last fall. I cannot sleep since for what I have seen. As a Jew I am saying that we must do something to stop the bloodshed in that country! People fight each other and children die. Why? Something, anything must be done.” It was a direct challenge to the Clinton administration’s reluctant response to the recent bloodshed in Europe, a challenge to take the past seriously enough to learn its lessons. This challenge is not just one, however, for leaders, it is one for all of us, and it rings true as much today as it did on that rainy day in Washington twenty-six years ago. Memory matters. Keeping it alive, teaching history, spreading the word is a moral mission. And learning from that history matters just as much, taking our past failures and doing it differently in the future. To borrow from Elie Wiesel, we cannot not talk about Auschwitz.